Assessing tribocorrosion behaviour of these, often, multiphase alloys is not a trivial task. Hence, most industry practices are focused on individual corrosion and abrasion properties than their combined action. Likewise, the fact these alloys are multiphase further complicates their assessment. Tribo-electrochemical methods proved as powerful tools in investigating tribocorrosion behaviour of single-phase alloys such as stainless steels. Often, however, they are only beneficial for single-phase alloys and when the alloy is not prone to localised corrosion. Combination of localised and tribo-corrosion mechanism complicates the current response.

The objective of this work was to differentiate the individual effects of localised corrosion and abrasion-corrosion occurring on the high-Cr WCI multiphase alloy. We investigated the effects of round and semi-angular coarse abrasive particles on the three-body abrasion-corrosion of these materials in a moderately alkaline solution with and without chloride ions. Electrochemical techniques, including potentiostatic polarisation and zero resistant amperometry, were employed. Scanning electron microscopy (SEM) and focused ion beam (FIB) methods were, then, used to analyse the worn surfaces and to gain a better understanding of the subsurface deformation and localised dissolution.

Why is it important?

Conventionally, electrochemical noise studies using ZRA involve galvanically coupling two nominally identical electrodes (Figure 1a). This arrangement has been extensively used to monitor localised corrosion incidents; i.e. nucleation, termination or stable growth of the pits and to determine critical pitting temperature. The polarity of the transients indicate whether localised dissolution is occurring on the WE1 or WE2; e.g. as per the most common polarity convention, a negative current transient indicates dissolution activity on the WE2.

In a tribocorrosion experiment, the WE1 undergoes abrasion-corrosion, whereas the identical secondary electrode WE2 is subjected to corrosion-only (Figure 1b). Using a ZRA on such an arrangement, information can be obtained on the effects of wear on passive film removal and reformation mechanisms. For example, under abrasion, an increase in the current measured indicates disruption of the passive oxide film. Post abrasion, film repair is generally associated with a rapid current decay similar to those of scratch tests.

The modified ZRA method, in combination with cyclic and potentiostatic polarization and surface characterisation techniques, revealed the three-body abrasion-corrosion mechanism and post abrasion interfacial corrosion susceptibility of these alloys: 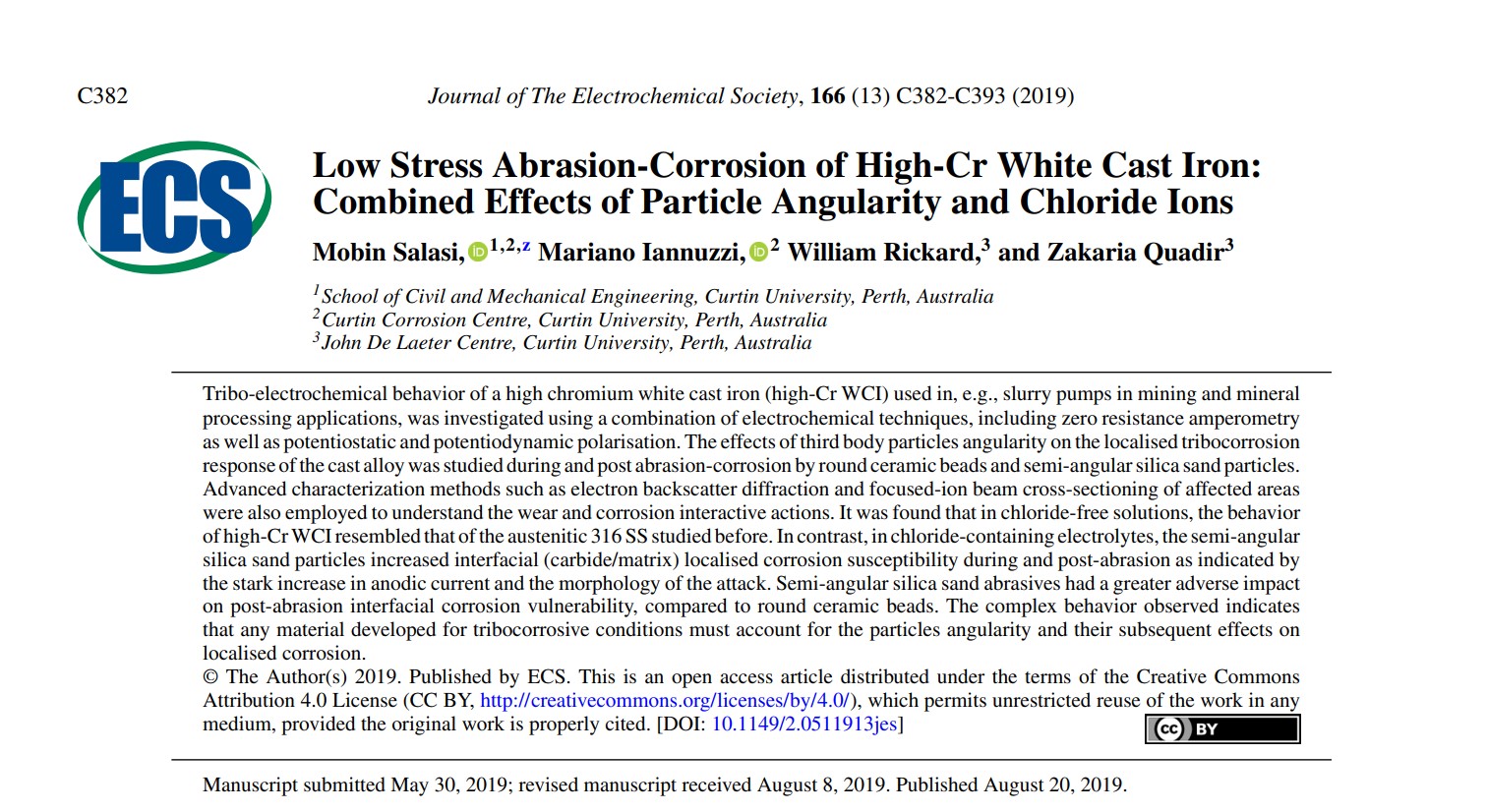 The article has been published as OpenAccess, distributed under the terms of the Creative Commons Attribution License, which permits unrestricted use, distribution, and reproduction in any medium, provided the original author and source are credited.