A recent subsea failure of two coupling assembly flanges made of UNS S32760, a 25 wt% Cr super duplex stainless steel, led to an extensive root cause failure analysis. The components showed a single longitudinal crack along the swaged ferrule, which arrested towards its thicker section. The brittle nature of the fracture surface, calcareous deposits on the ferrule and exposure to cathodic protection suggested hydrogen induced stress cracking (HISC). HISC is a term to refer to hydrogen stress cracking (HSC) of duplex and super duplex stainless steels (DSS and SDSS, respectively)when exposed to hydrogen generated by cathodic protection. [1]

The objective of this investigation was to determine the root cause of the failure based on a comprehensive materials characterization that included positive material identification, fractography, microstructure analysis, micro-hardness mapping, total hydrogen concentration, as well as pitting corrosion and tensile testing. The investigation was designed to address the three contributing factors of an environmentally assisted failure, namely, (i) the material and manufacturing routes, (ii) a hydrogen source, and (iii) the possibility of stress raiser and design considerations. Techniques included Scanning Electron Microscopy coupled with Energy Dispersive X-ray Spectroscopy (SEM-EDS), Electron Backscatter Diffraction (EBSD), mechanical and corrosion testing, as well as a HISC evaluation. Additionally, the material was examined to identify the potential crack initiation points from machining and swaging.

The results have shown that the failure resulted from a combination of factors, typical for HISC. The measured hydrogen content in parts of the material exceeded 40 ppm, more than an order of magnitude higher than what is normally expected in super duplex stainless steels. Additionally, a highly anisotropic, coarse microstructure was observed, which in combination with the introduced cold work from the swaging process and potential stress raisers from the ferrule design and machining could have facilitated crack initiation, ultimately leading to the failure of the component. Figure 1 shows a secondary crack adjacent to a sharp corner, which we suspect acted as a stress raiser. The fracture surface adjacent to the notch was predominantly cleavage. 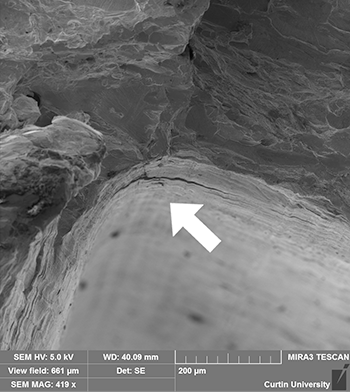 Our hypothesis was reinforced by the presence of extensive secondary cracking along the main, brittle fracture surface. Further, mechanical testing results showed a detrimental effect on the material’s properties due to the presence of residual hydrogen and the swaging operation.

The strong experimental evidence cast doubts about the significance of using the austenite spacing in the DNVGL RP-F112 Recommended Practice for highly anisotropic microstructures. Components produced using manufacturing practices that lead to highly elongated grains, such as rolling, extrusion, and swaging might be intrinsically susceptible to HISC regardless of the design considerations in the standard.

You can learn more about the case in our recent Corrosion Journal publication.

1. R. Johnsen, “Hydrogen Induced Stress Cracking of Duplex Stainless Steel in Seawater–What do we know and what is still unknown?,” EUROCORR 2017, paper no. 72317 (Prague, Czech Republic: European Federation of Corrosion, 2017).